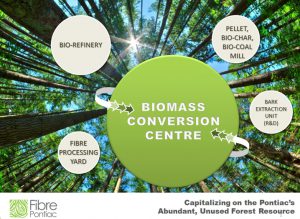 Fibre Pontiac executives delivered a progress report on the Biomass Conversion Centre (CVB) project to MRC Pontiac Council this morning. The highlight of the report was feedback on a milestone meeting held on September 19th at the U.S. head office of the bio-refinery project developer, with potential private investors, and representatives from Investissement Quebec’s New York office, the National Research Council of Canada and CanmetÉNERGIE.

Pierre Vézina, President of Fibre Pontiac, was instrumental in bringing together these potential partners in the development of the CVB. He said that, “while the CVB project has continued its forward trajectory this past year, this meeting has brought us a significant step closer to implementing a bio-refinery on Pontiac soil.”

The MRC Pontiac publicly announced the Biomass Conversion Centre (CVB) project in August 2015. At that time, the initiative to relaunch the Pontiac forest industry by capitalizing on an abundant supply of unused pulpwood had undergone several years of study that all pointed in one direction: to be successful, the forestry sector had to diversify to include the manufacturing of bio-products.

A bio-refinery is the hub of the much larger CVB project, and instrumental in bringing back competitive wood processing businesses to the Pontiac. Said Vézina, “After the Smurfit Stone mill shut down in 2008, the cost of procurement skyrocketed, making it impossible for small wood processing companies, such as Trebio, to remain competitive.”

In addition to the bio-refinery, which will mainly produce crystalline cellulose and lignin, the CVB project plan includes a torrefied pellet mill, a fibre-processing yard, a cogeneration unit to make the CVB energy self-sufficient, a bark-extraction unit for R&D purposes, and a sawmill, on or off-premises.

MRC Pontiac Warden, Raymond Durocher, is pleased with the progress of the CVB project.

“Pierre Vézina would say that there is still a lot to be done before breaking ground, but given how the project has advanced exactly as we had hoped so far, I am confident that what is at the end of what seemed like a long dark tunnel, is a very bright future for the MRC Pontiac,” says Durocher.

With the financial and technical support of the provincial and federal governments and the MRC Pontiac, as well as private investments in the bio-refinery, Fibre Pontiac will move on to the final steps of the project, which include the technical validation of the transformation technology, a technical and economic feasibility study, and the business case.

“There will be a go/no-go decision to be made at the end of each step, but we are confident that, with the continued support of our upper government echelons and the local community, this project will become reality,” said Vézina.